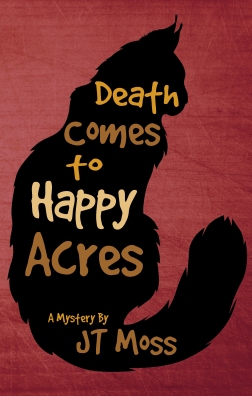 Death Comes to Happy Acres is now available as an audio book narrated by Peter Husmann at Audible.com. Coming soon to Apple and Amazon.

In the second of the Ruggles Road Rescue series, the shelter struggles with an over abundance of black cats. Meanwhile, attempts to find a forever home for Gregory, the yellow dog, hit a snag and, the volunteers discover they have one too many cats in the cat house, or is it one too few?

In the first of a new novella series by JT Moss, The Yellow Dog tells the story of Jess, a young woman who finds an injured yellow Lab and brings it to Ruggles Road Rescue. Though trying not to get too involved, she finds herself being drawn into the world of the animal shelter and the mystery behind the abandoned yellow dog.

Set in the mid-sixties in upstate New York, Jan Birch is a housewife who lives in a planned development of small, cramped homes. As she struggles with a difficult marriage and an anti-social son, she finds herself involved in the murder of the neighborhood divorcee, her boss’ difficult divorce when she gets a part-time job and, eventually, falls in love with a man who may or may not be a murderer himself. Includes the short stories Coffee Clutch, Bartholi’s Rest and Mountain View Terrace.

At sixty-three, former jazz musician Wade Lovett finds himself something of a trailer park Lothario carrying on affairs with three different women. But when circumstances prompt Carol Smitzky to make a compelling case for a marriage arrangement, he agrees. The next morning he visits girlfriend number two, Peggy MacCallister, to tell her the news—and finds her lying dead on her kitchen floor. Shortly after Peggy’s death, Wade is surprised to learn that she left him guardianship of her prized cat, Prince Albert. Even more surprising, she named Wade as beneficiary of her life insurance, which provokes her son to demand an autopsy. As a natural death seems less and less likely, Wade becomes the prime suspect in her murder forcing him to investigate the crime himself. Was Peggy killed by one of her two children, the park manager, a mystery second boyfriend, or was it Wade’s third paramour, Sue Mullins?

This is my ragdoll Buddy, the cat Prince Albert is based on in Death Comes to Happy Acres.

The first four reviews are in at Goodreads. All 5 stars. Release date is September 10, 2015. Pre-order available.

ARCs for Death Comes to Happy Acres are now available at NetGalley. In case you’re unfamiliar with NetGalley it’s a service where bloggers and reviewers can get advanced copies of new books.